Rising from the southwestern coastal plains of Taiwan is the city of Tainan. About 110 miles off the coast of mainland China and less than 2 hours from the capital Taipei by bullet train, this is a city of many names. Tainan is often called Taiwan’s birthplace and is the oldest city in the country. Just as the city’s environment has been continually shaped by the tides, so too has the waves of migration and conquest defined Tainan’s culture.

The historic quarter of Anping is a great place to start your Tainan journey. A fort was established on this sandy peninsula by Dutch traders in 1624. However, the Dutch were driven off this island by Chinese forces less than four decades later. Wander the nearby ruins of a merchant house and the fort’s ramparts, the ideal metaphor for a city that embraces its past. The Chihkan Tower rises closer to the city center. It is the first official seat of power of Taiwan and the keeping place of many of the earliest treasures and records of the city. 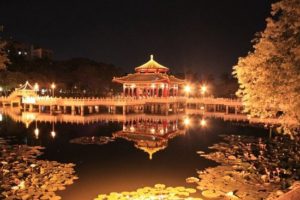 This city not only preserves its history, but it also reveres traditions, especially the spiritual. With more than 2000 shrines and temples, Tainan is sometimes referred to as the Kyoto of Taiwan. The temples here are places where daily life and ritual intertwine, from festivals noisy enough to wake up gods to residents quietly praying for guidance.

The Sacrificial Rites Martial Temple is just across the road from Chihkan Tower. Pay your respects to the patron saint of soldiers, Guan Gong, then pause for a while, beneath the shade of the 300 year old plum tree of the temple.

Pass through the Confucian Temple gates just as students have for more than 3 and a half centuries. It was created as the first center of higher learning in Taiwan and the remains a touchstone for many students who still come to pray for exam success.

Although this city ceded its political power to Taipei more than a century ago, Tainan still remains a powerhouse in one of the most important aspects of life, food. This is where the city’s locals, Chinese, Japanese, and Dutch heritages all come together. The servings are affordable and small, so you can try everything.

Tainan is also called The City of Snacks because it is like one traveling feast. Its markets are one of the best places to sample this city’s specialties. There are over two dozen night markets in Tainan, but none compares to the sheer energy, color, and size of the Flower Night Market.

The city has lots of places to stretch out when you are ready to walk off everything you have eaten. Lose yourself amid the ancient trees, pavilions, and bridges of Tainan Park. Or explore the mangrove forts and ancient shipping channels of Taijiang National Park, right in the backyard of the city.